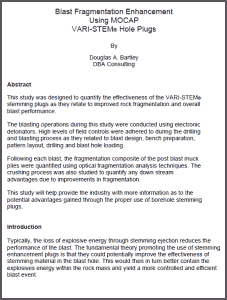 
The study revealed our plugs slowed stemming movement 130%, directing the blast energy into the rock, not up the bore hole. The plugs also decreased the mean average rock size in the post blast muck pile by 27%, which resulted in a 25 tons/hour increase of limestone through the primary crusher.

DBA did a computer analysis of "every truckload" of rock taken to the primary crusher. This was a 100% muck pile study, and did not rely on carefully selected, biased photos of a muck pile. It is also more reliable than "eye balling" the surface of the muck pile.