This extensive report shows the blast containment achieved with the Varistem allows pattern spread for major drill cost savings. Holcim Cement conducted this study at their quarry in St. Genevieve, MO. This facility is the largest cement producing plant in the US, producing over 4 million metric tonnes of cement per year. 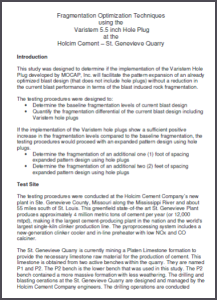 A review of these data show that the expanded pattern size of 14x19 with the implementation of the Varistem plug does yield improved overall fragmentation compared to the current 14x18 pattern typically used at the Holcim St. Genevieve Quarry. The added fragmentation performance represents a reduction of 11.6 percent in the "Mean" size of the rock from 8.373 inches to 7.499 inches. The size distribution throughout the D10 - D90 sampling is also improved. This increased fragmentation benefit would permit the current 14x18 blast design to be increased to the 14x19 pattern, thus eliminating 6% of the blast holes necessary to produce the same volume of rock with improved fragmentation.