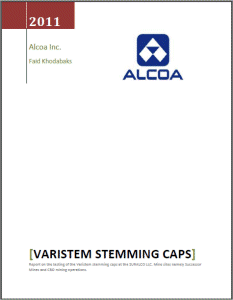 
Scope of Study
This test is designed to test the effectiveness of the Varistem stemming caps. The gains claimed by the Varistem Corporation are an increase in fragmentation, a reduction of flyrock hazard and a reduction of noise and vibration. The improvement on fragmentation will benefit both mining sites as fragmentation influences ROM truck fill factors and also reduce crushing and milling costs. But the reductions in flyrock, noise and vibration are most important for the CBO mining site as the bauxite mines move ever closer to the community areas, hereby disturbing the inhabitant's daily routines.

The main theory behind these stemming caps comes from the fact that an incensement of the confinement of the explosive energy within the borehole, drastic improvements in fragmentation can be achieved. This is caused by the extra time that the explosive force can work on the surrounding material. The manufacturer claims an increase of 25% in confinement. This claim should exert itself in 2 conclusions namely:

The following questions are researched in this study:

It was concluded that even with a pattern expansion of 1 meter extra burden, the fragmentation provided was more than sufficient, meaning a pattern expansion is justified using the Varistems which will result in more minable ore with the same amount of meters drilled.

The biggest gain that can be achieved with the Varistem is the gains in reserve where previously blasting of the ore was deemed impossible due to community issues.