A 12-month study of crusher throughput as a comparative measure of fragmentation, conducted by the University of Mines and Technology, Tarkwa, Ghana. 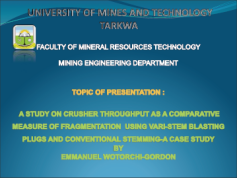 
Summary
Production of boulders had been on the increase and was affecting the mine's ability to increase its throughput to meet the demands of a competitive mining environment. Management therefore decided to acquire the VARI-STEM® Blasting Plugs to improve the quality of stemming hence better fragmentation. This project set out to study from fragments results of the Crusher throughput as a comparative measure of the quality of fragmentation using the VARI-STEM® Blasting plug as against conventional stemming.